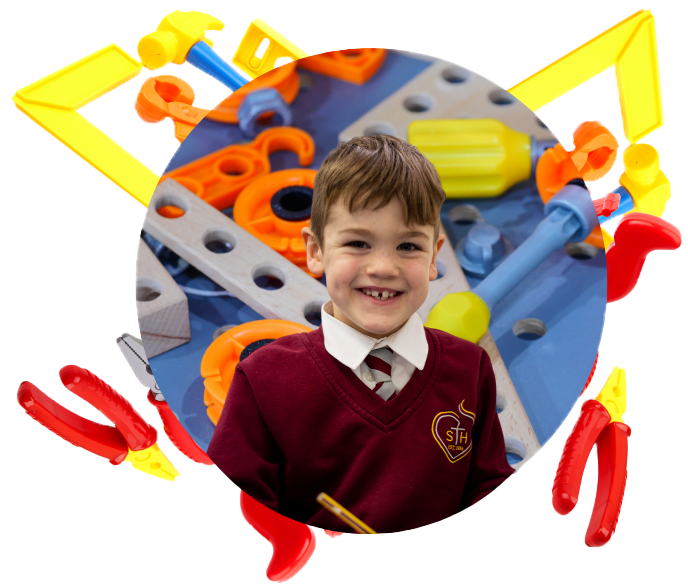 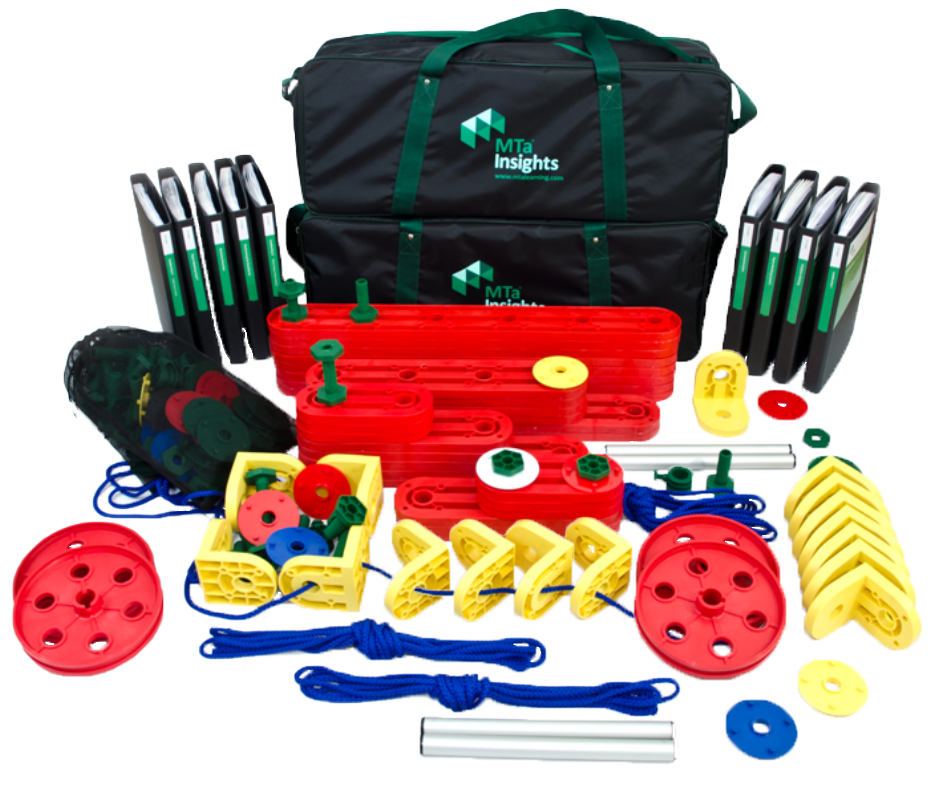 The sound of a football’s keen sting upon shallow steel. The echo of laughter from nearby classrooms. The dull ring of cold, playground air coating the fluorescent ceiling lights. I was in a school assembly hall, observing a DT workshop from a laptop webcam; watching, listening and learning as Mr. Dave Ravenscroft prepared for his day of teaching with a particularly infectious strain of enthusiasm. Why? Because this was not a normal day. This was the day of champions, winners, spartans, queens and kings – the day of the great Wheelbarrow Race; hosted at Sacred Heart Primary School! Our soon-to-be engineering experts swarmed into the assembly in normal order, gleefully chatting away to one another before settling into groups to have their register taken. All blissfully unaware of the fantastical session they were about to be a part of. Eventually, Mr Ravenscroft is presented, causing the children to simultaneously – as if part of a seamless, interlocking mechanism (not unlike the ones they’re about to design) – turn their heads in curiosity and anticipation.

Dave, full of life as always, introduces himself; commanding the attention of everyone in the room, “Okay everybody, today we have a very special session.” Their faces light up. “Today, we’re going to be splitting up into groups using these giant bags of tools to make some amazing structures, including a wheelbarrow which will carry a bunch of ping pong balls!” Their eyes roll over to the bags as they begin to fidget and talk quietly amongst themselves. It’s obvious that they can’t wait to get started!

But first Dave also must introduce his colleague…me, “This is Mr Ambrose” he announces,  “He will be writing about this lesson!”. I wave, there is applause, fireworks erupt, smoke rises from behind the assembly bench as the laptop is held aloft by Dave. Everyone chants in unison “Ambrose, Ambrose, Ambrose!”. It’s great!

Unzipping the bags, Dave begins to compile the equipment together. Emphasising the importance of collaboration and teamwork, Dave explains the role of each piece and how they cannot work without each other “What’s this?” he asks, holding up a plastic rivet, “A BOLT!” shout the children “And what about this?”, “A NUT!”, “Very good!”, Dave yells approvingly. These are very smart children!

Little do they know, it’s about to get competitive! “Now” Mr. Ravenscroft says calmly, “I have a bit of a beginners activity for you all.” The kids lean in, the teacher leans in; even I, sitting in an office over 10 miles away, lean in. We’re fully invested. He then tells the children to split into their teams and remove each item from their toolbag; laying them out on the floor in the smallest area possible WITHOUT STACKING anything. A challenge, but not one these kids aren’t ready for!

“Are you ready?” They’ve been ready their whole lives, Dave…“GO!” – The kids can’t wait. They zig zag past each other to their work areas, a sentient blur of charcoal and burgundy enveloping my screen. The echo of their beating feet erupts throughout the hall and sends a rippling crack into my earphones. I’ve missed this!

Some sit and others stand, with those standing advising their team from a birds-eye view on where to put the pieces and those on the ground arranging the display; each group showing fantastic teamwork and evidencing a key understanding of delegation, team roles and the value of fresh perspective.

“A SPINNY STICK” a child shouts, followed by audible gasps all around the hall. It wasn’t a tool before today, it wasn’t even part of the exercise, but by jove IT IS NOW! Afterall, Design & Technology is all about exploring possibilities, and this is something nobody expected! A Spinny Stick – the great DT workshop creation of 2021.

“WE NEED TO HURRY WE ONLY HAVE SEVEN SECONDS!” – Forget about the Spinny Stick, people. It’s really heating up here, and not only because Dave’s voice surprised me and I spilled my coffee all over my hand. Things are getting tense!

“Alright everybody, time’s up!”

The groups’ assigned spies, all of whom were searching for ideas from other teams, run back to their positions, taking guard over their intellectual property as if it were their own, plastic kingdom requiring protection from the enemy. Observing this himself, Mr. Ravenscroft addressed the class “Did anyone take any ideas from anyone else?” “…Yes.” the children answer, apologetically. “GOOD!”, he responds. Confused? As was the classroom initially, but he once again used this as an opportunity to reaffirm the importance of synergy in the classroom, and the willingness to share ideas with everyone, even those you are competing against. Creation and collaboration leads to innovation; this philosophy is at the core of the DT workshop (that and the Spinny Stick).

There are no champions here, all are winners! The groups all seem pleased with themselves, as they should be.

Now for our second activity of the day, starting with a game of thumbs up-thumbs down with our host, MRRRRR RAVENSCROFT!

First question: “Do you know how a compass dial works?”

Well, that was over quickly! But Dave, entertaining the likelihood that I did not know (I didn’t), explained it anyway. Thanks, Dave!

With that out of the way, it’s time for another creation! The children must, using what they now know of the pieces, make a  construction with moving dials. They have 10 minutes (It was 5, but they drove a hard bargain!).

Much like the first activity, Sacred Heart’s little engineers waste no time in getting started; incorporating elastic, nuts, bolts and bars into their clock-like creations – much to Dave’s delight.

“Alright guys, time to finish up your designs. These are looking fantastic! Give yourself a round of applause!” A very deserving uproar of applause reverberates off the walls, echoing throughout the hall and causing static interference in my laptop. The sign of a job well done!

But enough of the warm-up rounds, it’s time for the main event! The kids observe Dave with an unwavering attentiveness as he begins to build the first part of his wheelbarrow; explaining the purpose of each tool and the role it will play in the challenge. He discusses the physics behind what makes wheelbarrows work, and affirms to the class that no design is the “right design” and to treat the exercise as an excuse to really tap into their creative abilities. Not correct, not wrong, but different – that is the magic of DT workshops, everybody.

Using everything they’d learned, all 5 groups began to meticulously construct their glorious chariots of plastic and rubber. With so many voices overlapping, it was hard to keep track, but one thing was obvious; the whole class was putting a lot of thought into their design decisions, with each creation taking shape in vastly different, but equally miraculous ways. A half hour passes in an instant.

The kids seem unphased; completely invested in bringing their wheelbarrow vision to life with an obsessive, Frankensteinian level of commitment.

“Time’s up, guys!” – That dreaded phrase rings through the halls like a siren

An avalanche of ping pong balls sits menacingly on the other side of the assembly. Their nemesis can hide no longer. They’re coming for you, avalanche. Your days of tyranny are over.

GROUP ONE is up first. The goal? To fill the wheelbarrow with as many ping pong balls as they can before time runs out; each lap being completed by a different member of the team.

“ARE WE READY!?” – Dave asked enthusiastically, as our first racer assumes her running stance, limbering up like a lion preparing to take down a zebra.

Philosopher, race car and Disney icon, Speed McQueen, once said “I am speed!”. Well, on this day, his legend was honoured. This group’s wheelbarrow is lightning, but there’s a loss of control as they increase acceleration! They’re so driven to win the race that they’ve failed to pick up enough balls! A CRASH! The wheelbarrow smacks to the floor! BLIP, SWACK, KABOOM and other eccentric comic book sound effects can be heard off camera. However, although many of the balls have fallen, our speed racer is still intact!

A fantastic effort. What did they learn? The movement of their wheelbarrow was flawless, but the bucket could be improved in later prototypes. It’s a shame, but such is the nature of this marvelous sport – 1 ball

GROUP TWO: This team had sacrificed speed for stability. Reminiscent of a heavy freighter, their bucket sat at a 40 degree arch, forcing the balls to remain in the back of the wheelbarrow whilst moving. A design Isaac Newton himself would’ve been proud of – 11 balls

GROUP THREE: Ladies and gentlemen, I couldn’t quite believe my eyes here. The ingenuity on display…remarkable. Group Three’s design had their wheelbarrow risen only slightly above ground; allowing them to utilise a low centre of gravity. It meant using more pieces and making it heavier, but that didn’t matter much in the end – 43 balls!

GROUP FOUR: Ever seen the SciFi movie Tron? That’s what we were looking at here! A bullet, motorcycle design which navigated the course like a laser; achieving unfathomable speeds. But it proved difficult to control! A spin out occurred and many balls were lost! Credit to them though, as a quick recovery by our talented racer put everything back on track – 8 balls

GROUP FIVE: Here, we had got to see a truly magnificent piece of engineering in action; a two-pronged T.I.E Fighter design which used elastic to securely seal the frame and the wheels in place. Even though its narrow build didn’t allow for a counterbalance mechanism, it still cut through the air like butter. Some very talented racers in this team – 33 balls

And there we have it, people. A brilliantly entertaining session at Sacred Heart Primary School comes to a close, with Group Three emerging as the eventual victors of the race. The winners of the day, however, were all of those who took part.

What do you think would make this DT Workshop even better?

“If it was longer and there were more activities!” An Interview with Jack Wright: A Day in the Life of a Techie