A multi-platform tool that allows you to create immersive 3D spaces using set shapes and your own photographs.

Editor works on any web browser. Dedicated iPad and android apps. Android apps on VR enabled phones allow you to explore the spaces you create in VR mode.

Web editor allows for coding of objects in the space using blockly, typescript or java.

Whether creating a world to spark a story or recreating a complete biome, the tools available in CoSpaces are numerous and effective. Easy to learn, pupils can create their own worlds in a matter of minutes. Once they have mastered the basics, pupils can begin to code stories using the characters they have created.

You start with a blank workspace. You can then add a prebuilt background or your own 360॰ image. Using the prebuilt models, you can quickly build up a scene of characters and props, add your own photographs, even add sounds.

Once you are happy with how your scene looks, explore with the play button. Or if you have a mobile device you can use its inbuilt gyroscope to explore the environment as if you were walking through it.

Any changes made to a scene are on a near instantaneous sync between devices and the cloud (dependent on your internet connection of course). This means children can be editing a scene on a laptop and testing it on a mobile/VR device, leading to greater communication and teamwork between pupils.

Advanced features include adding code to elements in the scene to allow characters to become interactive or move around the scene when prompted.

Once the scenes are complete the can be shared through the CoSpaces gallery which produced a handy link and QR code linking to that particular scene.

Time needed to learn how to use it and get going:

10 minutes to create your first scene, deep toolset that can be mastered over time.

What the DelighteX says about CoSpaces:

CoSpaces currently is one of the most intuitive – if not the easiest – tool available to create virtual reality environments.

Where to find it: 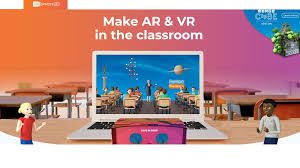