Storytelling Week: The Bear Under the Stairs

Well, here it is. Storytelling week. The week we’ve all been waiting for, right? I certainly have been. I personally couldn’t wait to share with all of you one of my favourite short stories.

Yes, that’s right. ‘The Bear Under The Stairs’. A timeless masterpiece. The crème de la crème. The peak of literary prowess. A triumph of the written word. I could go on, but I’ve run out of synonyms.

It was my favourite book as a boy. It awakens a nostalgia in me. An inner child I thought I’d lost. In fact, I know it so inside-out that I would’ve happily based my dissertation on it, if it weren’t for those stick-in-the-mud professors at University!

The short tale opens by introducing us to a little boy called William. Little William appears to be an active sort of lad, with a newly tattered jumper, messy hair, and a rather unique imagination.

An imagination which manifested itself in the most horrifying ways…

One day, when passing the staircase in his home, William noticed the door, previously shut, had creaked open. Unable to reign in his curiosity, he took a gaze, and what did he see?

At least, it was to young William.

He becomes so petrified at the prospect that this bear will harm him that he decides to try and ease his mind by feeding him whatever he can find. For breakfast, lunch, tea and supper, the bear dined like a king under the stairs- whilst William, with his tattered jumper and messy hair, would go hungry and scared, with his cries of fear remaining unheard.

Pretty soon, all poor William was thinking about was that mysterious bear, in his lair, under the stairs.

That was until a strange, unpleasant stench began to creep out from the lair and William’s mother began to gawk and stare. What kind of nightmare could produce a smell this foul? Could it be something big and scary, with claws and a bellowing growl? William’s mother investigated; taking him by the hand to the lair under the stairs, with a mop, dustpan and towel.

Swinging open the door, and imploring young William to follow whilst his feet remained firmly planted on the floor, away from the scary door, what did she discover? But old, flea-ridden rugs, with rotten food covered in bugs. A nutritious eyesore, fit for a hungry omnivore.

Needing not to see any more, feeling assured, William and his mother carried out their chore of cleaning the filthy floor together, as son and mentor. Knowing now that the beast had ceased and did not need to feast, William slept soundly with his new teddy bear- holding it tightly with love and care.

As for the bear, was he ever even there? In his lair, under the stairs? I will answer this soon, but please prepare, as I will no longer rhyme with such mediocre flair.

I think we’re all thankful my career as a poet never quite gained traction, but you get the point.

Now, as I stated in the beginning of this blog, this book is one that is close to my heart. Not only because it describes fear and imagination so artfully, but also because it can be viewed through a more philosophical lens.

On the surface, it’s a short story about a young boy who allowed his imagination to get the better of him, but that’s a conclusion we came to when we were children. We’re adults now. We’re taller and more boring than we were back then. So, we’re going to try and look at this on a deeper, philosophical level.

What if the bear was real? It’s a sound conclusion to come to, after all. That is, if you’ve done more than simply read the text. This is because, my extremely patient reader, the imagery in the book can lead one to develop a very different understanding.

We are subject to fully realised illustrations of the bear on multiple occasions, suggesting that he/she does at least exist in some capacity. Additionally, a common theme throughout the story is fear; a fear shared by both William, who is terrified to venture under the stairs, and the bear, who is equally terrified to leave it. Does the bear fear William? Are William and his family the unwanted house guests? Are they the imaginary ones? We don’t really know.

I would argue these open-ended theories, however, are what make reading comprehension fun! When you start reading your next book, encourage yourself to question the reliability of your assumptions. Maybe you’ll find yourself developing fresh perspectives you never before considered. 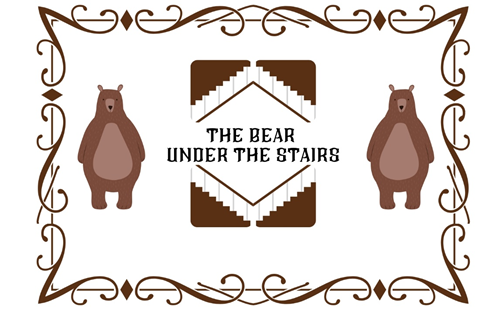 Being Happier in Lockdown

Four Teachers Who Changed My Life

Manhunt: The Case of the Phantom Teacher

The Heswall Round Table