VR in the Classroom

The class sit expectantly as the door slowly opens. They hear the familiar squeak of the trolley wheel and a hushed excitement spreads across the room. The teacher wheels in the TV trolley and a whispered “Yessss!” escapes 30 expectant mouths. The teacher is going to show us a video!

Funny to think that while most adults remember this scene fondly from their own school days, as we approach the end of the second decade of the 21st century, there will soon be a distinct generational gap between those people who left school knowing the simple pleasure of a class teacher showing a BBC2 documentary they taped at 3am on an old VCR, and those who wouldn’t have experienced a classroom without some form of interactive presentation device.

The sheer pace of technology in the classroom means that the way pupils consume and create content across their learning can change significantly in only a matter of years. Obviously we have moved beyond taping BBC schools programs on our VCRs late into the small hours of the morning, we now find the same documentaries on YouTube; But for those looking to engage pupils, there are still exciting and immersive new technologies out there that are just waiting to be utilised by those willing to brave the new frontier.

Virtual Reality (VR) is one such technology and is gaining traction across the education sector as a way to engage pupils, offer experiences and change their perception of the world. We have been using forms of VR at hi-impact for a couple of years, however with our ClassVR sets we have really seen the benefit of VR on a classroom scale. We have worked with schools to take pupils around the world to experience places that would otherwise be relegated to images in textbooks or webpages. Pupils studying the Romans can stand inside the Coliseum and look around in 360 degrees identifying features and gaining understanding from a different perspective. They can then take this experience and use it in their own work. They could use it as the impetus for a piece of creative writing or to gather information for a non fiction. Though what if they could use it to create their own VR world to demonstrate their understanding?

Working with the CoSpaces platform pupils can build their own world and even add code to bring that world to life. Instead of a slide based presentation and “death by PowerPoint”, pupils can create a living world based around their understanding of Ancient Rome and the practices of Roman culture. Explore a Villa with working hypocaust? Investigate artifacts in a Roman themed museum? Or see the crowds at the might gladiatorial arenas decide the fate of the competitors? These are all possible using the blocks, models and commands available using the CoSpaces platform. Pupils pick up the tools very quickly and are soon creating a wide array of worlds all based on their own understanding of a topic. Having pupils create their museums as the topic progresses allows them to explore areas that they wish to learn more about. An interactive space that not only engages pupils but allows them to own their learning in a way that is personal to them.

An alternative way for pupils to share their understanding is using Google VR’s Tour Creator. This allows pupils to choose from an entire planet of imagery courtesy of the Google Street View project and add their own information and points of interest to these images to create in interactive tour related to the topic they are studying. Sticking with the Roman example, pupils can find the Coliseum in Rome and add an image from inside to their tour. They can add images to the scene, add narration and background music and finally publish their tour so that it is viewable in VR.

From the initial “Wow!” moment, my favourite part when showing pupils Central Park from 200ft up for the first time, to pupils exploring their own creations and actively editing their work based on what they can see in the VR world. I feel that the power of this technology will only grow as it becomes increasingly common in schools, and whilst pupils may see the teacher push in a trolley with a squeaky wheel, a 30inch CRT television and a VCR into the classroom, it will be in their simulated History lesson on “How we used to live”. 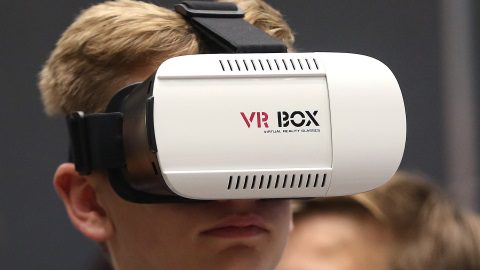